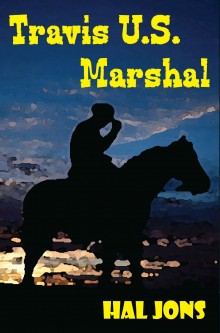 A Carl Travis and Joe Wallace adventure. The town of Pierre was stunned by the ferocity of the raid. It cleared the bank, left the Sheriff wounded on the side-walk and saw seven townsfolk dead. Joe Wallace, the Town Marshall, was out of town with Rod Miller, the banker’s son, visiting Ellis and Dill of the Half-Moon and Lazy T, and their guns were sorely missed.

A few days earlier Art Lovatt and his men had spent a day in town roaming the saloons, and Sam Homer said that some of them were camped just beyond Lone Star graze for a couple of days before the hold-up. When Carl Travis arrived, everyone told him to head after Lovatt’s gang.

Travis, however, was not in the habit of doing things just because everyone tells him to. When people tell you to go look in one place, it means there’s somewhere closer to home they don’t want you to look. Besides, Travis knew that Art Lovatt didn’t do the bank job.

So which of the solid citizens criticising Travis for staying put and letting Lovatt’s gang escape is responsible? And how many more townsfolk will have to die before the truth is told?